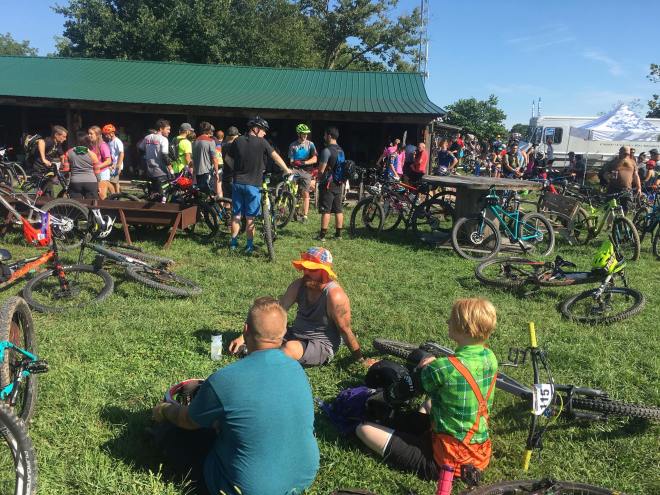 I greet most festivals, conferences, and meet-ups with squint-eyed suspicion. When a group of people gets together under the banner of some shared interest — could be mountain biking, LARPing, beach combing, having OCD, anything — there is inevitably a jostling for rank that I cannot stand.

I expected that Singletrack Mind would be the same. I was delightfully surprised.

Maybe it was because we were all too sweaty to maintain pretensions, but everyone I encountered was chill. And Will and I were too!…eventually.

Our first afternoon at Two Rivers was the opposite of chill. Between leaving Kansas City late, without our most important supplies, wet conditions at the bike park, and a vast underestimation of what awaited me the next day, the first night of Singletrack Mind was a bit of a cluster for us.

In this blog you’ll find my three pieces of advice for what to expect when you’re expecting your first enduro. Learn from my ill-preparedness!

Packing for your camping-enduro adventure

Will and I had a dry run for Singletrack Mind a few weeks ago, a two-day camping trip to Smithville Lake to bike, make s’mores, and swim.

It, unfortunately, went off without a hitch.

See, when you have one successful camping trip — in which you remember to pack bug spray and sunscreen Chapstick, cooking tools and silverware, trash bags and papertowels — you tend to think you’ve gotten the hang of it.

This time around, in our overconfidence we forgot: 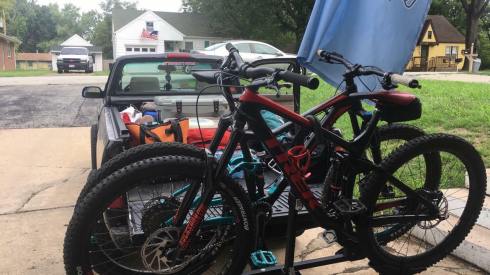 All packed up with everything but a bed, blanket, towels or cooking grate. Good to go!

In the meantime though, with our few remaining hours of daylight, we were going to pre-ride parts of the course. With that in mind…

After a Spring and Summer of dry-as-a-bone weather in Missouri, the rains have arrived, no doubt conjured by my boyfriend buying himself a shwanky new Trek.

Thus, when we arrived at Two Rivers, there was gravel in the field that had previously been in the parking lot, flowing streams where there had been dry beds, and sad little mounds where there had once been berms.

The grounds crew and volunteers were rock stars at getting the park ride-able again. But even they, dirt masters that they are, cannot drain the hills. If you pre-ride no other part of this course, let it be Bluffline, which is, in the space of about a quarter mile:

The huge boulders that make up one side of Bluffline were weeping more than I was as I slipped and slid my way past them. By far the most technical part of the bike park, Bluffline’s features were nearly impossible for me in their slick wet condition. (If you’re my boyfriend you’ll just motor your way right over every foot-high ledge and gnarly root, but I’m not writing this for my boyfriend — get outta here, Will!).

So after I’d hiked my bike over Bluffline (sigh) we ran to Walmart, got a bed, forgot to get paper towels (again!), and waited around for someone to radio back to the employee we’d asked where we could find firewood, before we realized we’d been literally standing in the firewood aisle. Fun!

See that drink in my hand? That’s the hellacious instant coffee I mentioned. And important fact about coffee: it’s not particularly hydrating. The opposite, in fact. So, with that in mind, here are my thoughts on –

How to survive a 5.5-hour enduro when your conditioning sucks

After stage one of the enduro, my memory goes a little hazy — the remaining stages blur into one sweaty shmear. But I do remember making it back up to the aid station and asking what time it was.

“About 2,” was the answer. We had started at 10 a.m. Four hours in and I still had two stages left to go. I sat on a rock — ahh, the comfiest rock ever, I thought — to catch my breath, drink some water, and contemplate quitting for the millionth time like the little bitch I am.

That’s when my boyfriend climbed the rise at a jog and came over to contemplate my carcass.

Dammit, I thought. Now I have to finish — I cannot let my boyfriend have this on me.

“Keep it up, babe!” I hissed at him as he began his next descent.

So, a few things made this enduro particularly challenging.

As I mentioned, the week of rain before Singletrack Mind had completely saturated the ground, but the two days we were there were bright with sunlight. So not only was the sun bearing down from above, it also felt as if the whole park was steaming up from below, like we were biking Satan’s bowels. It. Was. Hot.

Will started the enduro right in front of me and would have kept an insurmountable lead if he hadn’t popped his chain off on the first transfer stage. I caught up about the time he got it fixed, so I started following behind him, trying to keep up like the rube I am.

He’d just disappeared around a hill when I made a slight over-correction on an exposed curve, sending me OTB and into a tree. Though I had cursed my hot black knee pads the whole race, they saved my skin on that crash. No broken skin, just a bruised ego. And luckily, Will was far enough ahead by then that he didn’t witness my utter shame at crashing — on a transfer stage. Ugh.

As long as they don’t maim you, crashes are pretty good at reminding you to calm your tits, a good strategy for surviving the rest of the race, which was long, long, hot and hotter.

By the end I was muddy, a little bruised, and tired beyond belief. I was proud of myself for finishing (11 out of 20 or something like that), and though I swore up and down I’d never do that to myself ever again, I know I will. And next time, I’m bringing a bed.

One thought on “Singletrack Mind Festival 2018: How not to prepare for your first enduro”